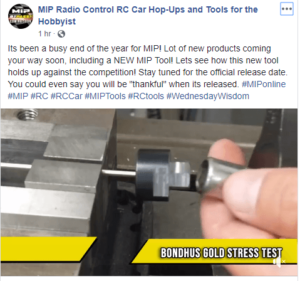 “Its been a busy end of the year for MIP! Lot of new products coming your way soon, including a NEW MIP Tool! Lets see how this new tool holds up against the competition! Stay tuned for the official release date. You could even say you will be “thankful” when its released. #MIPonline #MIP #RC #RCCar #MIPTools #RCtools #WednesdayWisdom“

This site uses functional cookies and external scripts to improve your experience.

COVID-19 and other World Events.

Due to the current COVID-19 pandemic and other World Events, shipping may take longer than expected.

NOTE: These settings will only apply to the browser and device you are currently using.